As the 100th follower on their Twitter page, Duck Tape UK sent me a roll of their rather funky duck tape.
Up until I started following them, I had always thought that duct tape was just something that tradesmen used (for what, I have no idea!) and I never thought it would come in so many colours and patterns! Apparently, using duct tape is a massive thing in crafting at the moment.
I was excited to see that they sent me a roll of leopard print tape – I ❤️ leopard print!

However, when it came to doing something with it, I was stuck. Another mooch on Google gave me instructions for making wallets, bags, hair accessories, flowers and even shoes! As cool as they looked, I didn’t really fancy any of them. Later on that night, I spotted a plain black gift box lurking in the cupboard, part of the set I used to make our collage box. A- ha!

Twenty minutes later, the rather plain black box had been transformed into a funky leopard print box.

It was so easy to do. Normally I hate take as I get caught up in a sticky tangle and lose my patience (and that’s if I find the end!) but the Duck Tape was easy to use. It unrolled and stick down smoothly and with no air bubbles or wrinkles. The tape is really sticky and quite tough to cut unless you use really sharp scissors so it’s not particularly child friendly, although with supervision older children may be ok.
I did want to use it for something for the kids though. I’ve wanted to do something that represents us as a family, so I covered a piece of thick cardboard in the tape. I then drew around each of our hands on plain black card and cut out. I arranged them on the leopard print board. The photo doesn’t really so it justice (I’m a rubbish photographer!)!but it looks fab. 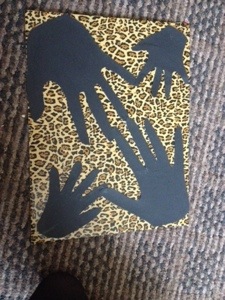 At £4.99 a roll from Amazon it isn’t the cheapest addition to a craft collection but is lots of fun and could be used to pimp up all sorts of things!

*Disclosure
I received this product for being the 100th follower on Twitter. All thoughts and opinions expressed are my own.

One thought on “Duck Tape: a review”

There was an error retrieving images from Instagram. An attempt will be remade in a few minutes.